Welcome to our weekly insight report, where we share our learnings from the previous week as our industry adapts and responds to Covid-19.

The table below shows searches from the last three weeks (30th March – 19th April) for return travel in the December holiday season, across our key markets.

Travel months from May to December

This table shows the percentage change in searches between 30th March and 19th April for travel in the months of May to December, based on return travel. 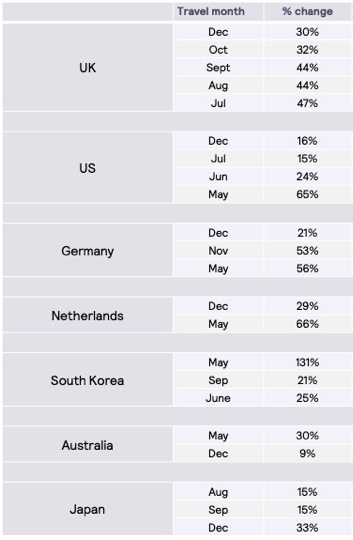 These are the insights from our fifth weekly pulse survey of more than 5,000 travellers in 17 countries.

Domestic travel has a similar trend:

“The travel peak is shifting”

“In the UK, increasing traveller optimism is reflected in our search data for travel in the second half of the year, with searches for long-haul travel increasing 30% over the past three weeks.

“This points to the travel peak shifting to later in the year and is reflected by providers increasing opportunities for flexible booking options to stimulate interest despite ongoing uncertainty as to when international travel restrictions might be lifted.

To reflect this growing need, we have introduced an option for travellers to view flight and hotel options with flexible booking policies on our site and in app.”