Uncovering the Aviation Potential of Okinawa

Okinawa, the most South Western of Japan’s five main islands, was recently identified as one of Skyscanner’s seven trending hotspots for 2017. With a rise of 44% in searches to the destination from the UK in the last year, Japan’s sub-tropical prefecture islands are experiencing a rise in global travel demand.

What opportunities does this represent for the aviation industry to tap into this up-and-coming Asian destination? In order to shed some further light on the opportunities, Skyscanner teamed up with OAG to apply some more in-depth data analysis to this exciting destination.

Okinawa can be reached directly on any one of the 42 scheduled routes served by airlines operating at the airport. Twenty eight of these are domestic routes which account for 85% of all airline seats but there are international services to many of the main North East Asian regional centres – Taipei, Incheon, Hong Kong, Shanghai and Beijing

The route network has been remarkably stable over the past couple of years, with almost no routes added or dropped, and almost entirely focussed on relatively short haul flights. Bangkok is the first significant addition in several years with the first Peach Aviation flights between Okinawa and Bangkok taking place in February 2017. Aside from this, the only other long haul flight has been the occasional operation to Phoenix in the US operated by All Nippon Airways.

Network planners will be interested to see that we’ve delved into the data to reveal routes in and out of Okinawa (OKA) receiving the highest number of searches globally, but for which the route currently remains unserved. A direct connection between London and OKA has been searched for over 30,000 trips and is the most searched route inbound to Japan’s trending destination. There’s also significant demand for routes within the Asian region with Chengdu, Macau and Kunming Changshui all showing noteworthy popularity. Outbound from Okinawa, the OKA to DPS route is a popular one, with over 40,000 searches globally last year but currently isn’t provided direct by any airline. There also seems to be ample opportunity for routes out of OKA to Manila, LA, Honolulu, and Chengdu airports – all receiving between 20,000 to 40,000 searches globally.

It does seem that the lack of available direct flights may be putting off many potential travellers. While Honolulu and Manila do feature among OAG Traffic Analyser’s Top 10 passenger markets from Okinawa, actual passenger numbers to London, Chengdu and Kunming are a fraction of the searches recorded by Skyscanner.  This shows the demand is there but there is room for carriers to move in with alternative services to the route that may drive up the numbers who finally choose to book.

Certainly, Honolulu looks like a good candidate for a direct air service. Aside from almost 40,000 annual passengers already travelling indirectly, there are a further 160,000 travelling between Okinawa and other points in the US. Although this route would be longer than connecting via Tokyo it is likely that some passengers would opt for this routing.

Skyscanner data suggests that several routes into and out of OKA are under-served meaning there are options for the route with lower than average conversion, which leads us to believe that there is room for additional services. The largest of those routes, from Shanghai to Okinawa had just under half a million searches last year but with a lower than average conversion. Take a look at the top 10 most underserved routes below.

The SHA-OKA route may not be a simple matter of there being insufficient capacity on offer. OAG Schedules Analyser shows that between China Eastern Airlines and Juneyao Airlines there were 429,438 airline seats available in the 12 months to November 2016. With OAG Traffic Analyser indicating that there were just over 223,000 passengers who travelled directly between Okinawa and Shanghai, and a further 92,000 who connected at one or other end of the flight to another flight, it would appear that aircraft were not full. This is borne out by the fact that only 2% of people travelling between the two cities chose indirect routings via another airport.

Factors such as choice of airline, price or schedule may be the reason carriers aren’t filling as many seats on this route. The arrival of a new operator, especially a low-cost carrier, would address this.

Where does the Money Lie? Analysing Yield Markets

Our yield graph analysis – with data from Skyscanner’s Travel Insight data tool below indicates the yield made per passenger compared to other city pairs currently operated. The OKJ (Okayama) to OKA route shows there could be significant value with rates of over $250 dollars to be made per leg. The OKA – UKB route by contrast is only valued at around $70 per leg despite being a marginally longer distant at around 1200km. Carriers looking to operate this route should therefore consider the potential yield. The markets below should be considered for a non-stop service if market sizes allows but could also be served with a stop in a hub. 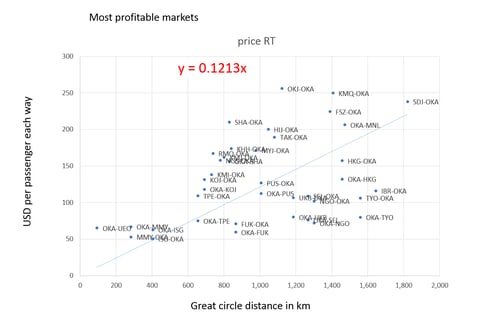 This article was produced in partnership with OAG.

Want to find out more about Skyscanner's cutting-edge data tool Travel Insight? Get in touch.